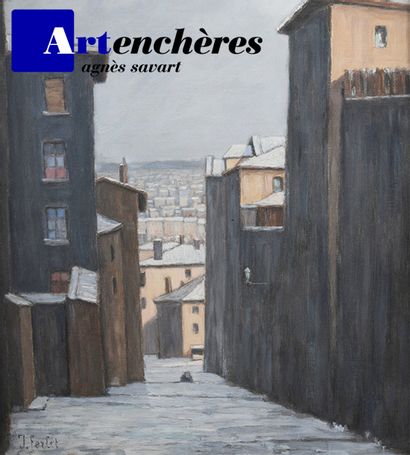 Jean FERLET was born on February 13, 1889 in Taluyers in the hills of Lyonnais of a butcher father.

Leaving the countryside, Ferlet settled in Lyon on the left bank of the Rhone and worked at various small jobs from grocery boy to shirt maker. Although he seemed to approach painting as a self-taught artist, he exhibited almost every year between 1947 and 1956 at the Salon de la Société Lyonnaise des Beaux-Arts and twice at the Salon d'automne. His paintings offer moving urban views with, like Louis Chapuy, a predilection for the old working-class districts of Lyon such as the Guillotière. Ferlet takes a tender and modest look at his environment, whose simple and hardworking life is enlivened by the presence of small bistros and sometimes that of a few street performers. His very soft palette with subtle nuances, delivers a touch of poetry all tinged with nostalgia on a popular world that lives its last moments. At the same time, Ferlet remains fascinated by his native countryside and the beauty of the landscapes of the Monts du Lyonnais, of which he knows how to magnify the changes of light according to the hours and the seasons and which he represents almost systematically without characters, like a lost paradise. His delicate and unique work, almost unpublished, deserves to be considered as a rediscovery.

Louis GOYET is a very rare example of a working-class painter. Living in the Lyon suburb of Villeurbanne, Goyet worked nights at the O.T.L. (Omnibus and Tramways of Lyon), assigned to track maintenance. Although he seems to have taken some drawing courses, we know that he was close to the brilliant Maurice Ferréol (1906-1969) whose colors his paintings sometimes adopt. Goyet's paintings are extraordinary in their solid and proud presence. Far from any idea of seduction, the painter chooses his subjects from his daily life. Self-portraits, quiet and peaceful interiors, wives busy with household chores, children playing humbly, his whole universe expresses a simple and assumed happiness, the joy of beautiful Sundays. In counterpoint, a certain facetiousness with an anarchist tendency, illuminates some compositions where humor mixes with a sharpened sense of observation and well engaged positions. Much more than a simple naïf, Goyet testifies to an acute and verist awareness of his world, which he admirably shares with us through his painting.

Christian ROYER, who passed away three years ago, a modest and discreet artist, has left us a remarkable, refined, delicate and sparkling work. Whether in oil or watercolor, each composition differs and opens a field of reverie where the imagination likes to get lost. The titles express the ambition of an artist as fascinated by the charms and diversity of the landscapes of his region (from Beaujolais to Bugey, without forgetting Lyon), as by dreamlike worlds borrowed from mythological, literary or poetic references, without disdaining a hint of eroticism, but always in search of the most subtle of beauties.

Artenchères is at your disposal for a more detailed state of conservation report, on request.

Photographic reproductions may not give an entirely accurate picture of the actual condition of a lot, notably because the colors or shadows shown in the reproduction may differ from what would be perceived by a direct observer. The dimensions of the lots are given as an indication, with a reasonable margin of error (less than 10%). Not all defects are visible on the photos, and the appreciation of colors may differ according to the screen.

Our auction house no longer accepts telephone bids for items valued at less than 100 euros. You still have the possibility to give us a purchase order or to bid directly in Live.

Lots preceded by an asterisk are presented at the judicial rate.

- Pick up directly at our office on appointment

- To call upon Mail Boxes Etc : devis@mbelyon.fr or any other carrier of your choice

The lots must be collected within 10 working days after the sale. Beyond that, a storage fee of 7.50 € according to the size and weight of the object will be charged.

Payment by credit card, bank transfer and check. Cash within the limit of 1000 € for French residents and 15000 € for foreign residents.

We use cookies to provide you with a better browsing experience, perform site traffic analysis, and deliver content and advertisements most relevant to your interests.

By allowing these cookies, you agree to the deposit, reading and use of tracking technologies necessary for their proper functioning. Read more about our privacy policy.